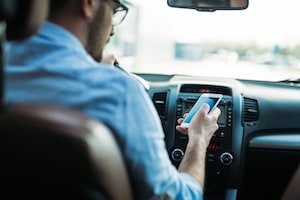 Texting and driving has been illegal in Florida for years, but police officers could not use that as a reason to pull over drivers since it was a secondary offense. However, if a Florida driver was pulled over for another reason, such as speeding, then a citation could be issued for the texting while driving as well.

As of July 1, 2019, Florida became the 45th state to make texting while driving a primary offense. The new law allows Florida law enforcement officers to pull over drivers because of texting and driving – without any other traffic violation. It can be used as grounds to be stopped by a police officer.

While the new law has been in effect for over six months, law enforcement agencies agreed to give drivers a grace period through December 31, 2019. Verbal warnings were issued in lieu of a citation. Still, within those six months, Florida Highway Patrol states it issued 1,087 warnings with at least 1,220 citations issued statewide by all law enforcement agencies for texting and driving – staggering high numbers that truly substantiate the need for the new texting while driving law.